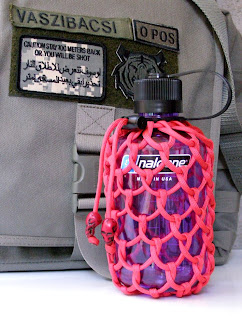 It seems that I got too much free time in my hands and I just can’t sit tight. Browsing around the net I came across some interesting constructions made with Paracord. Actually I have done some Paracord bracelets in the past, but this time it’s something different. I saw some guys making Paracord covers for their water bottles. I usually carry with me a water bottle and I thought, why not?

Since last week I had with me a Nalgene 1lt bottle (32oz for the non-metric people…) but I realised this summer that it is too big for my Fatboy, so I bought me a ½ lt one (17oz…). Unfortunately the only one that could be shipped to Greece was a purple one, but it still gets the job done. At the same time i purchased some Safety Red paracord (it’s not very Milsim styled, but i want for EDC) and started working… With no further delay, here it is… 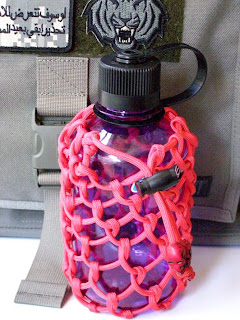 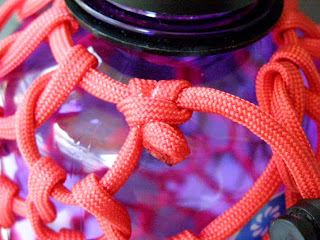 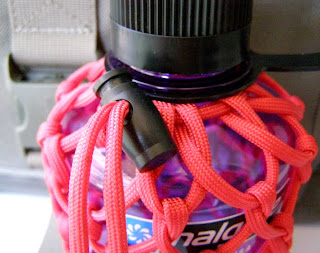 Details of the fastening around the neck of the bottle. 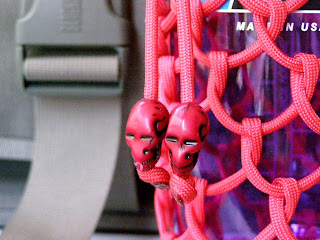 The beautifull skull beads around the fastening 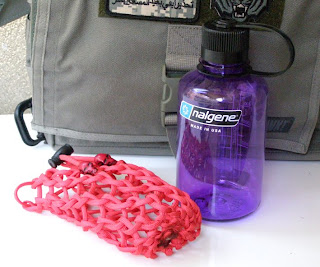 The koozie removed from the water bottle. This should hekp when washing is needed...

The material needed are not something extraordinary or rare, in fact some of our readers can purchase them in their local Walmart or so. For me i had to purchase them from Ebay as usual… 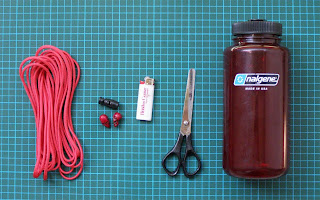 • The desired volume water bottle. I used a Nalgene bottle but it could be any other bottle, plastic or metal, it’s up to the user
• Paracord. I used Safety Red one, because it makes the bottle more visible, as i plan on using my bottle as an EDC (work, cycling, hiking, etc…). For the small ½ lt bottle i used around 10 metres (30 feet…) of it
• A pull cord stopper
• Two beads if wanted for decoration purposes
• The usual stuff needed for Paracord braiding like a lighter and tweezers. 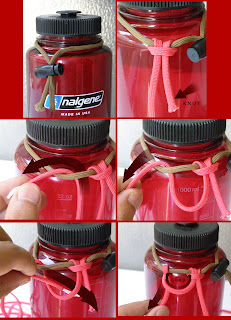 It all starts with a single loop of Paracord around the neck of the bottle. The length of it should be enough to allow it to tighten and loosen in order to remove the cover. I used some extra length so i could use some decorative beads at the end. In the photo i show a Coyote piece of Paracord to make it obvious…

Then, I just did a simple loop around the initial loop. It is simple as it is shown. Remember that at the end the beginning the cord must be knotted to be secure.

Grab the cord and bring it under the initial loop and pull it all the way. Leave some to create the eye of the netting.

Then bring the cord back and put it in the eye and pull it all the way. The length of the loop will determine how big the eye will be. Don’t make it too tight cause you will have to do this endlessly…

Go over and over again… I did about 8-10 eyes around each row and it took me about 2,5 hours. With smallers eyes it could be 1 hour and with smaller eyes it could take hours and hours…
At the end just tighten the knots to secure the Paracord at the bottom. As it’s usually done with Paracord, cut the cord and melt it with the lighter. Personally i also use some Super Glue on the final knot to secure it even more.

If desired you could put some beads on the initial loop (photo 1) or just make a knot. Again melt the ends, glue them and it’s done. Now go out there and hydrate!!!
Αναρτήθηκε από Vaszi bacsi στις 6:48 μ.μ.

All the "guns" presented here are airsoft replicas which can no way be modified to fire real ammunition. They use pressurized air to propell 6mm plastic BBs that can cause no injuries and are completely legal to own by any adult.